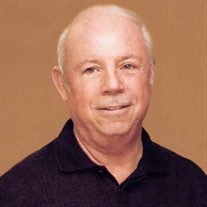 Elwood Briward "Henry" Stow, Jr. passed away peacefully at his home in Kenner on Tuesday, March 8, 2022. He was 82. A native New Orleanian, Henry lived his younger childhood years on St. Philip Street in the French Quarter, until his family relocated to the Irish Channel. He graduated with the class of 1957 from St. Aloysius High School in New Orleans, and proudly served in the United States Marine Corps Reserves. He then married the love of his life, Jean Margaret Lemoine Stow, in 1961. He enjoyed a decade’s long profession in the beverage alcohol industry, as both a distributor and supplier. He worked for Strauss, Magnolia and Christian Brothers, until he retired after 25 years of service with Bacardi Imports. He formed strong relationships with his customers, business associates and competitors alike. Henry will always be respected for his tenacious work ethic and unfaltering commitment to excellence. Henry was well traveled, but his heart was in his city, and had several favorite restaurants: Bozo's, Sal n Judy's, Vincent's, Porter and Luke's, Impastato's, Austin's, Tony Angelo's, Jaeger's, Nephew's, Ristorante Filippo and Jack Dempsey's to name a few. The Nice Guys Social Club is where he and his friends gathered for card games and televised sports. He cheered faithfully for the New Orleans Saints since the team's inception and was a steadfast Alabama Crimson Tide football fan. He participated in the annual "Aunts and Uncles" Mardi Gras parade at St. Michael Special School. Most of all, he enjoyed time with his family, and doted on his 5 grandchildren and his new great granddaughter. Beloved husband of Jean Margaret Lemoine Stow; father of Henry Michael Stow (Christina) and Melissa Anne Stow Nunmaker (Randall); son of the late Thais Emelda Wild Stow and Elwood Briward Stow; brother of the late Florence Stow Delpidio and Glen Joseph Stow; grandfather of Zachary Stow, Trenton Stow, Brett Stow, Kylie Gilbert (Will) and Amanda Nunmaker; and great grandfather of McKenna Grace Gilbert. Our family would like to thank all the care givers at the PAM facility in Covington, Louisiana, and Heart of Hospice. A Funeral Mass will be celebrated in the chapel of L. A. Muhleisen and Son Funeral Home, 2607 Williams Blvd., Kenner, LA on Saturday, March 26, 2022 at 11:00 a.m. followed by private interment in Greenwood Cemetery. Visitation from 9:00 a.m. until 11:00 a.m. In lieu of flowers, please consider a charitable gift to St. Michael Special School, 1522 Chippewa Street, New Orleans, LA 70130 in remembrance of Henry. To share memories or condolences, please visit www.muhleisen.com.

Elwood Briward "Henry" Stow, Jr. passed away peacefully at his home in Kenner on Tuesday, March 8, 2022. He was 82. A native New Orleanian, Henry lived his younger childhood years on St. Philip Street in the French Quarter, until his family... View Obituary & Service Information

The family of Elwood Briward "Henry" Stow, Jr. created this Life Tributes page to make it easy to share your memories.

Elwood Briward &quot;Henry&quot; Stow, Jr. passed away peacefully at his...