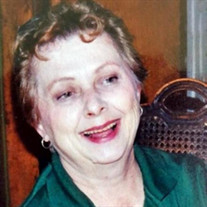 Elizabeth Ann “Tucky” Moss Argus, 81, died June 9, 2021 in her home in New Orleans. A devoted mother and grandmother, Tucky was also known for her quick wit, and her love of God, His people, and all of His creation. Born June 1, 1940 in New Orleans and raised in Lake Charles, Tucky graduated from Lake Charles High School in 1958 having marched and played snare drum with the famed LCHS “Kilties” marching unit. She received her Bachelor of Arts in French in 1962 from Newcomb College of Tulane University, where she served as Secretary of the student body on a “ticket” that included as President her future husband, Bill Argus, Jr. After marrying in 1962, Tucky joined Bill while he served on active duty as a Lieutenant and architect with the U.S. Navy’s Civil Engineer Corps from 1962 to 1966, based in Indian Head and Bethesda, Maryland (where two of their children were born), as well as Pearl Harbor, Hawaii. Upon leaving the Navy, the family returned to Louisiana, where Bill began his practice of architecture throughout the Gulf Coast, while Tucky began her practice as a full time mother and homemaker. Tucky knew from a very young age that she had been adopted, and felt blessed to be embraced by such a warm and loving family. After raising five children of her own, she received a calling to serve others in a related way. She entered graduate school at the University of New Orleans, receiving a Master of Education in Counseling in 1997. She went on to work for many years as a licensed professional counselor at St. Gerard Majella Alternative School, a high school established to assist pregnant teens continue their education and support them in their choice. Tucky was a woman of deep faith with a most generous heart. She and Bill were long time members of the People of Praise, an ecumenical, charismatic, covenant Christian community in 22 locations in the US, Canada and the Caribbean, including New Orleans. They were also active members of Our Lady of the Gulf Parish in Bay St. Louis, as well as Resurrection of Our Lord and St. Dominic Parishes in New Orleans. A lifelong naturalist with an encyclopedic knowledge of plants, gardening, and birds, Tucky also loved reading, Louisiana history, sacred scripture, music, theater, and dance, encouraging all of her children unconditionally in their pursuit of the arts. She spent many wonderful summers as a young girl and as a grown woman on Prien Lake in Lake Charles and in Bay St. Louis, Mississippi, sailing, swimming, crabbing, fishing, and waterskiing. Tucky was preceded in death by her husband, Wilbert L. “Bill” Argus, Jr, her parents Judge Clement and Elizabeth “Betty” (Rock) Moss of Lake Charles, as well as her brothers Clement Murphy Moss, Jr. of Charlottesville, VA and Dr. Lucien Kennedy “Ken” Moss of Lake Charles. She is survived by her sisters-in-law Wanda (Scoggins) Moss and Mary Ann (Coffey) Moss, her children Elizabeth (John), Bill III (Kim), Mary, Caroline (Jerry), and Anne (Bill), as well as 12 grandchildren: Jeff, Teresa, Brooke, Ethan, Kenzie, Austin, Coco, Mary, Elinor, William, Michael, and Fiona. Family and friends are invited to attend the visitation on Saturday, June 12, 2021 (Tucky and Bill’s 59th Wedding Anniversary) at 12:00 Noon at St. Francis of Assisi Catholic Church, 631 State Street, New Orleans, Louisiana 70118, with the Funeral Mass following at 1:00 PM. Reception will follow at the home of our dear and generous friends Gilly and Mark Jaunet, 4317 Baronne Street (just off Napoleon and St. Charles Avenues), New Orleans, LA 70115. (On-street parking is available in the surrounding neighborhood.) Burial will take place Monday, June 14, 2021 at Biloxi National Cemetery. In lieu of flowers, the family asks that donations be made to the Woman’s New Life Clinic of New Orleans. We love you and miss you Nonnie, but All Shall Be Well.

The family of Elizabeth Ann "Tucky" Moss Argus created this Life Tributes page to make it easy to share your memories.