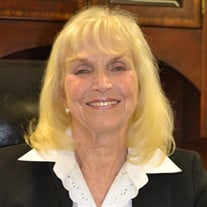 Eleanor Cameron Skov, Owner and President of Cameron College, passed away peacefully in the early hours of November 5, 2015 in the sanctuary of her home. She was born in Monroe, LA on December 1, 1930 into the Wilder family of Calhoun, LA. She is preceded in death by mother Ella Harper Wilder, father Loice Pinkey Wilder, brother Thomas Wilder, and husband John Donna Cameron. She is survived by her husband of 35 years Peter T. Skov M.D., sisters; Dorothy Heacock, Wanda Plouet, sister-in-law Beth Wilder, Children; Mike Cameron, Kevin Cameron, David Cameron, Cynthia Starring, Grandchildren; John David Cameron, John Michael Cameron, John Paul Cameron, Joshua Cameron, Courtney Starring Wheeler (Chase), Jessica Cameron, Chase Starring, Delia Eleanor Salazar (Edgar), Marissa Cameron, Vaughn Cameron and numerous nieces and nephews. Mrs. Cameron graduated from Calhoun High School, and continued her education earning a B.S. in Business Education at Northeast Louisiana State College and a M.A. in Education at Northeast State University. As a single mother she supported her family by becoming a teacher at St. Vincent Academy in 1967 in Shreveport, LA, where she found a love and passion for teaching and education, as she attended college by night. She taught courses including Economics, Sociology, Government, American History, American Politics, General Business, Accounting and typing. She founded The Creative Youth Advocacy in Shreveport, and helped establish Youth Advocates, a crisis intervention program for youth with drug, alcohol, and related problems, and later became President of the Board of directors. She also served as President Representative and Vice President for the Louisiana Council of Social Studies, Director of Caddo Committee for Humanities, Director of Audubon Commercial College in New Orleans, Director for Postsecondary Schools’ Department for the 1982 NBEA Convention, Treasurer of the Louisiana Proprietary School Association, President of the Louisiana Association of Private Colleges and Schools, Chairperson of Region VI Proprietary Advisory Council, member of the Chamber of Commerce of New Orleans and the River Region, and President/Owner of Cameron College in New Orleans, LA. Before Mrs. Cameron founded Cameron College in June of 1981 located on Canal Street in New Orleans, LA she worked on Capitol Hill in Washington D.C for Congressman Joe D. Waggoner in 1976 and continued her political career by supporting many politicians on the state level and in Washington D.C. While in D.C. she worked closely with the Department of Education. Mrs. Cameron’s strong belief in treating each student as an individual has helped improve private education immensely and she received great joy and pride as her graduating students walked across stage to be handed their diploma. She has become a role model and inspiration to many and her success will extend through many generations by her family, former students and future graduates of Cameron College. She is much loved and will be dearly missed. Relatives and friends are invited to attend the Funeral Mass at St. Francis Xavier Catholic Church, 444 Metairie Rd., Metairie on Monday, November 9, 2015 at 12:00 p.m. Visitation at the church from 10:00 a.m. to 12:00 p.m. A Graveside Service will be held on Tuesday, November 10, 2015 at 2:00 p.m. in Mulhearn Memorial Park Cemetery, Monroe, LA. In lieu of flowers, masses preferred. Arrangements by L. A. Muhleisen & Son Funeral Home.

Eleanor Cameron Skov, Owner and President of Cameron College, passed away peacefully in the early hours of November 5, 2015 in the sanctuary of her home. She was born in Monroe, LA on December 1, 1930 into the Wilder family of Calhoun, LA.... View Obituary & Service Information

The family of Eleanor Cameron Skov created this Life Tributes page to make it easy to share your memories.