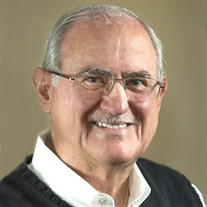 On Wednesday, March 22, 2017 at 11:12 P.M., Edward Lawrence Rodriguez closed his "Code Book" and submitted his life to the Lord for the Final Inspection. Eddie (age 84) completed his life's work in the arms of his beloved wife and surrounded by his four adoring children. 'Eddie' was the husband of Beverly Mae Ranatza Rodriguez; father of Elizabeth Frazier (David), Karen Beter (the late Bruce), Sandra Smith (Kevin) and David Lawrence Rodriguez; son of the late Rose Mary Tarantino Rodriguez and Edward Jesus Rodriguez; brother of Ricardo 'Ric' Rodriguez (Nancy) and the late Rosemary 'Rary' Rodriguez Hitt (Al); and "Poppa" to Samuel, Nathan and John Frazier, Brett and Christina Beter, and Alyssa, Brandon and Caitlyn Smith. He was also survived by many cousins, nieces and nephews. Eddie grew up in a huge Italian family where family and faith were of paramount importance. The focus of Eddie's life was to serve his family, love the Lord and be true to his Catholic faith. Eddie was a gentleman and humble servant of God. His selfless love and prayerful, unwavering devotion was respected by all. Eddie lived his life to serve. He was awarded the Order of St. Louis Medal by the Archdiocese of New Orleans in recognition of a lifetime of service to the local Catholic Church. Eddie was an Extraordinary Minister of Holy Communion and a committed late-night adorer for the Adoration Chapel at Our Lady of Divine Providence Church. Eddie had a profound desire to help teens - especially those unable to attain a Catholic education. He dedicated his Sunday nights for many years (well into his 80s) by serving as a founding and core team member of the OLDP Life Teen Group, a youth retreat moderator, an Abbey Youth Day leader, and a School of Religion instructor. Practicing Architecture since 1955, Eddie was renowned as "The Code Expert." His areas of specialty were design, construction documents and code research. Eddie was the Project Architect for the Naval Support Activity Facility of Louisiana in Algiers, which won a National Design Award. He served as Project Architect for numerous banks, schools, office buildings and churches throughout the South. Eddie began his career with August Perez and Assoc. in 1955 and joined Underwood Verges and Assoc. in 1965, becoming a Partner shortly thereafter. The firm evolved from Ernest E. Verges and Assoc., to Morton Verges Architects to VergesRome Architects during the 52 years that Eddie was employed there. Eddie also served the City of Kenner in the Planning Department as the Consultant Planning Director for several years. Eddie had a peaceful and creative spirit that was nurtured by art classes at the New Orleans Academy of Fine Arts. He enjoyed traveling with his bride of 59 years and delighted at the marvels seen throughout Europe and the U.S. Blues music, Jazz Fest, the French Quarter, creole food, and a cannoli at Brocato's brought a smile to his sweet face! Eddie attended St Aloysius High School in New Orleans and graduated with a Bachelor of Science degree in Architectural Engineering from Louisiana State University in May 1955. He was a former President of the LSU Alumni Association, Jefferson Parish Chapter, and a past Vice-President of the American Institute of Architects, New Orleans Chapter. No more "Humbug" Dad ... the Ultimate Fire Marshal has granted His Eternal Approval: "Well done good and faithful servant." Rest in peace; your love will remain in all of our hearts forever. Relatives and friends are invited to attend the Funeral Mass at Our Lady of Divine Providence Catholic Church, 8617 W. Metairie Ave., Metairie on Monday, March 27, 2017 at 12:00 P.M. Visitation at the church from 10:00 A.M. until the time of Mass. Interment in Lake Lawn Park Cemetery. Arrangements by L. A. Muhleisen & Son Funeral Home. To view or sign the online guest book, please visit www.muhleisen.com

On Wednesday, March 22, 2017 at 11:12 P.M., Edward Lawrence Rodriguez closed his "Code Book" and submitted his life to the Lord for the Final Inspection. Eddie (age 84) completed his life's work in the arms of his beloved wife and surrounded... View Obituary & Service Information

The family of Edward Lawrence Rodriguez created this Life Tributes page to make it easy to share your memories.