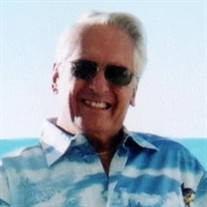 Edward Adam Dusang June 9, 1938 - April 17, 2022 Edward Adam Dusang was born on June 9, 1938 in New Orleans, Louisiana to Edward and Myrtle Dusang. He played high school football and was passionate about cars, boats and airplanes. Ed met the love of his life, Phyllis Ann Mayer at age 17 and they were married on May 17, 1958. Together they raised three daughters: Peggy Hahn (Dewayne), Ishee Miller (Daniel) and Becky Leforce (Rick). Ed and Phyllis raised their daughters in a house full of love, faith, family, fun, music and dancing! Ed was the big brother to William Dusang (Jody), Melanie Lunn (Rodney), and Donald Dusang (Esther) and he was “Grandpa Ed” to 11 wonderful grandchildren and 14 great-grandchildren. Ed was also close to his sister-in-law, Linda Mayer. Ed graduated from East Jefferson High School in 1957 and was called up by the United States Navy, where he was stationed in Memphis, TN. He was a lifelong member of the Masonic Order and a dedicated member of the Lutheran Church. After completing his time with the Navy, Ed worked as an airplane mechanic at Chevron Oil Company in New Orleans. At the age of 31, Ed moved his family to Colorado where he began his 44 year career as a corporate pilot flying the Citation CJ3, Rockwell Saberliner, King Air 200 and Gulfstream G150, to name a few. After retirement, Ed spent many joyous hours working at Christ the King Church, on projects in his workshop, fishing with his family and drinking wine on the Veranda with the love of his life. Relatives and friends of the family are invited to attend the celebration of Ed’s life on Tuesday, April 26, 2022 at 2:00 PM, Christ the King Lutheran Church, 1001 W. Esplanade Ave., Kenner, LA. Donations are accepted in Ed’s memory for the maintenance and preservation of the memorial garden at Christ the King Lutheran Church where Ed dedicated much time and love. To share memories or condolences, please visit www.muhleisen.com

The family of Edward Adam Dusang created this Life Tributes page to make it easy to share your memories.