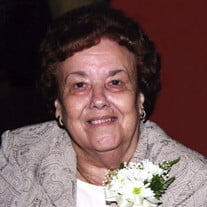 Dorothy C. Donahoe passed peacefully at her home from cancer on the afternoon of August 1, 2017 at age 87. She was a long-time resident of Metairie. Dot was the beloved wife of the late James F. Donahoe. Dot is survived by her three children Terence M. Donahoe (Donna), Kevin P. Donahoe (Katherine), and Erin D. Druhan (Bob); six grandchildren Michael Donahoe (Jamie), James Donahoe (Jessica), Daniel Donahoe (Melissa), Kathryn Donahoe, Kelly Schleismann (Eric), and Timothy Druhan (Nicole); and, 11 great-grandchildren. She is also survived by her sister Ruth C. Pitre (Val), niece Patrice Barattini, first cousins C.J. Polito (Marilyn) and Catherine Polito, and sister-in-law Dolores Donahoe (late John), as well as a host of other relatives and friends. She had many special persons throughout her life especially Jim Garvey who she considered as another son and who she loved dearly. She was the oldest daughter of the late Sarah C. Chavannes and Ernest Chavannes; sister of the late Marilyn C. Barattini (late Bill) and Carol C. Horn (late Charles); and, aunt of the late Wayne J. Pitre. Dot is survived by several childhood friends who her children considered as aunts and uncles, including Flo Blouin, Mary Callac, the late Miriam Crain, Mary Lou Thompson and the late Robert Thompson, as well as all of their children who are considered as cousins. Dot met many persons during her life, including the Garvey’s, the Wolfes, the Virgadamos, the Hondzinskis, the Federicos, the Heinszs, and many others. The Donahoe family would like to thank Dr. Ken Smith, Dr. Donald Adams, and other physicians and staff at East Jefferson General Hospital for their kindness and service to Dot. The Donahoe family wishes to extend a special gratitude to the staff of Notre Dame Hospice and Chateau de Notre Dame for their care of Dot, including Nick, Christina, Deborah, Sr. Paula, Ann-Marie, Ella, and Doris. A special thank you to Dot’s long-time physical therapist from Southern Flex – Pricilla. Dot and husband, Jim, devoted their lives to their three children ensuring they obtained the finest educations. Later, Dot and Jim doted over their six grandchildren. Dot attended Mc Main High School and Louisiana State University (LSU). Dot loved growing orchids, ferns, bromeliads and any other plants which caught her eye and grew the plants in the large greenhouse built by Jim which was destroyed in Hurricane Katrina in 2005. Dot battled breast, lung, adrenal, and thyroid cancer with Jim having lost his life to lung cancer. Dot participated in many spring and fall garden shows at the City Park Botanical Gardens, as well as in countless Susan G. Komen, American Cancer Society, and Leukemia & Lymphoma Society events, for the past 23 years promoting the Four-o’clock Flowers Around the World Cancer Memorial in honor of Jim which will now honor Dot’s battle with cancer, too. Dot loved to cook and used the Holy Trinity of Cajun cooking (onion, celery, green bell pepper) in most of her meals. She could cook a kick-butt chicken and sausage jambalaya. Relatives and friends are invited to attend the visitation L. A. Muhleisen & Son Funeral Home, 2607 Williams Blvd., Kenner on Monday, August 7, 2017 from 6:00 p.m. to 9:00 p.m. and on Tuesday, August 8, 2017 from 9:00 a.m. to 12:00 p.m. followed by a Funeral Mass at 12:00 p.m. Interment in St. Patrick Cemetery No. 1.

Dorothy C. Donahoe passed peacefully at her home from cancer on the afternoon of August 1, 2017 at age 87. She was a long-time resident of Metairie. Dot was the beloved wife of the late James F. Donahoe. Dot is survived by her three children... View Obituary & Service Information

The family of Dorothy C. Donahoe created this Life Tributes page to make it easy to share your memories.

Dorothy C. Donahoe passed peacefully at her home from cancer...