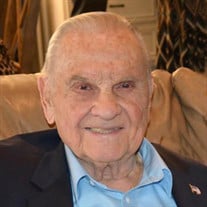 Donald J. “Dutch” Villarrubia, age 88, passed away at home surrounded by his loving family on Monday, January 4, 2021. Born and raised in New Orleans, Louisiana, Dutch moved to Metairie, Louisiana as a young adult where he raised his family. He served the community by becoming a proud Louisiana State Police Trooper, retiring as a Sergeant. Additionally, he served and retired from the Louisiana Department of Revenue. Dutch was a long time active member of many organizations: Louisiana State Trooper’s Association; Louisiana Peace Officer’s Association; American Association of State Troopers; Metropolitan Peace Officer’s Association serving as President and Secretary. He was also a member of and former minister of the Eucharist at St. Edward the Confessor Catholic Church, and former minister of the Eucharist and lector at Our Lady of Divine Providence Catholic Church. Dutch is also a member and former Grand Knight of the Knights of Columbus Council 9347. A U.S. Navy veteran, he served our country during the Korean War and was awarded the National Defense Service Medal. Preceded in death by 10 months, the love of his life, his wife of 66 years, Yvette Tabary Villarrubia; his parents, Roger Villarrubia and Celuta Tete Villarrubia; brother James (Corinne); sister Helen Develle (Roger-living). He is survived by his 6 children, Donna Schmidt (Gary) , Debbie Hess (Brent Ledet), Deanne Clesi (Dave), Denise Giles (Ken), Donald Jr “Bubba” and Douglas (Lauren), 16 grandchildren and 12 great grandchildren. Also, brothers Roger “Fr. Jerry” (Lee-deceased), John (Edie), sisters Marge Pool (Steve-deceased), June Hendrick (Russell) and many loving nieces, nephews and other relatives. Dutch was a good humored man never without a joke and some good laughs. He spread laughter and a smile everywhere he went. His hard work and dedication to his family will be forever cherished. He was loved and admired by many, especially his McDonalds breakfast friends. He loved his family, lounge chair, naps and donuts. The family would like to thank the caretakers of Compassus Hospice. A private prayer service burial will be held due to Covid restrictions. The family will invite everyone to celebrate the life of Dutch and Yvette with a memorial at a later date. In lieu of flowers, offering masses or a donation to the American Cancer Society on behalf of 3 of Dutch’s daughters preferred. L. A. Muhleisen & Son Funeral Home in charge of arrangements. To share memories or condolences, please visit www.muhleisen.com

Donald J. &#8220;Dutch&#8221; Villarrubia, age 88, passed away at home surrounded by his loving family on Monday, January 4, 2021. Born and raised in New Orleans, Louisiana, Dutch moved to Metairie, Louisiana as a young adult where he raised... View Obituary & Service Information

The family of Donald J. "Dutch" Villarrubia created this Life Tributes page to make it easy to share your memories.