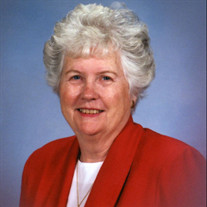 Dolores Marie Baquie Wall (affectionately known as DeeDee or Ronnie to friends and family) was born in New Orleans and passed away in Harahan, LA on Monday, August 14, 2017 at the age of 93. She graduated from Sophie B. Wright High School and soon began a career in banking, eventually retiring from Whitney National Bank. In 1945, during World War II, she met and married the love of her life, George D. Wall of South Dakota. Together they raised their family in Metairie, Louisiana, until she lost her dear George in 1993. She lived the remainder of her life in Harahan, LA. Dolores enjoyed traveling, camping, cooking, playing with her grandchildren and great-grandchildren, visiting her numerous nieces and nephews, participating in the many social and charitable organizations that she belonged to, and getting together with her lively group of friends, especially her Bunco group of more than 50 years. She was a longtime parishioner of St. Catherine of Siena Catholic Church in Metairie and then St. Rita of Cascia Catholic Church in Harahan. Her most enduring and beloved legacy is the Wednesday night family dinners that she and George began more than 40 years ago. They grew to include not only her three children and their spouses, but her seven grandchildren, their spouses, nine great-grandchildren, extended family and numerous friends. Everyone was welcome at "Wednesday Night Dinner!" She will forever be remembered for this tradition which continues to enrich the lives of her family as it is being carried on by her children and grandchildren. Dolores will be lovingly remembered by her brother, Norman Baquie (Rosemary); her three children and their spouses, Wayne J. Wall (Elsie Smith Wall), Bruce G. Wall (Brenda Laizer Wall), and Karen Wall Guilmino (Tay C. Guilmino); grandchildren, Brad Guilmino (Nicole), Crystal Gristina (Nick), George Wall (Christine), Kerrie Guilmino, Kyle Wall, Nicholas Wall (Cristina) and Traci Rigdon (Ryan); great grandchildren, Nicholas, Cameron, Ryan Wesley, Taylor, George Thomas “G.T.”, Waverly, Addison, Thomas and Evelina; and many nieces and nephews. She was preceded in death by her parents Mary Root Baquie and Peter Baquie, and her brother Charles Baquie (Val). Relatives and friends are invited to attend the Funeral Mass to celebrate Dolores’ life at St. Rita of Cascia Catholic Church, 7100 Jefferson Hwy., Harahan, on Friday, August 25, 2017 at 11:30 a.m. Visitation will begin in church at 10:00 a.m. Interment in Greenwood Cemetery. Arrangements by L. A. Muhleisen & Son Funeral Home.

Dolores Marie Baquie Wall (affectionately known as DeeDee or Ronnie to friends and family) was born in New Orleans and passed away in Harahan, LA on Monday, August 14, 2017 at the age of 93. She graduated from Sophie B. Wright High School and... View Obituary & Service Information

The family of Dolores Marie Baquie Wall created this Life Tributes page to make it easy to share your memories.