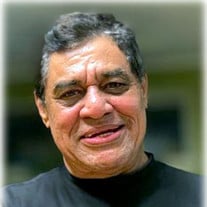 Danilo Rene Paz, or as he was known to everyone, “Rene” passed away on Thursday July 25th, 2019. He was 69. He is survived by his wife, Idalia Paz; daughter, Leyla Paz; four sons, Mario Paz, Marco Paz, Gerson Paz, Danilo Paz, Jr.; 17 grandchildren and 1 great grandchild. He is also survived by his sister, Miriam Ucker; five brothers, Tulio Paz, Guillermo Paz, Carlos Paz, Felipe Paz and Noel Paz. His death is preceded by his Father, Lucio Tulio Paz; mother Juana Guillén; sisters Gladys Padilla, Gilma Sosa, Noemi Moya and brother Humberto Paz. In 1985, Mr. Paz and his family immigrated to the United States from Honduras. He worked in construction in North Carolina before settling in New Orleans in 1989, where he retired from Simmons Plating & Grinding in 2015. Even though Mr. Paz settled in the U.S., he never forgot his hometown of La Ceiba, Honduras. He visited La Ceiba every May for its annual Carnival always bringing gifts & clothes for all his old friends & their friends & so on. Mr. Paz enjoyed life. He was gregarious, a larger than life story teller, skilled soccer player & coach, joyful dancer and master on the grill. He believed in working hard, playing music loudly (to be appreciated) and always finishing your plate. He would (and often did) give you the shirt on his back. He was a stern yet loving father & affectionate husband. He was married to Idalia “Meya” Paz for 49 years. He called her “Mor” short for Amor. He loved and cherished her more than anything and never wanted to be without her. She was with him in his final moments. He passed away peacefully surrounded by his family, as he would have wanted. Relatives and friends are invited to attend the service. Services at L. A. Muhleisen & Son Funeral Home, 2607 Williams Blvd., Kenner on Saturday, July 27, 2019 at 11:00 a.m. Visitation from 9:00 a.m. until 11:00 a.m. Interment in Jefferson Memorial Gardens Cemetery.

The family of Danilo Rene Paz Sr. created this Life Tributes page to make it easy to share your memories.

Danilo Rene Paz, or as he was known to everyone, “Rene” passed...