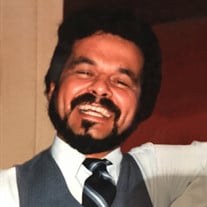 Cecil “Cisco” Alleman on Sunday, November 19, 2017 our brother Cisco went to be with the Lord. He is survived by his son, Chad Alleman; grandchildren, Chad Jr. and Demi Grace; mother, Marie H. Alleman; brothers, Charlie, George (Cindy), Larry and Doug Alleman; sister-in-law, Betty Alleman; and many nieces and nephews. He was preceded in death by his father, Carmel “Floyd” Alleman; brother, Floyd “Gizmo” Alleman, Sr. ; sister, Angel Ann Alleman; and nephew, Marcus Alleman. Cisco moved to Metairie from Lutcher, LA at the tender age of 5 years old in the mid 50's along with his family. He attended East Jefferson High School and then embarked upon a lifetime of hands on work, at which he always excelled. He was gifted with his hands and they served him well. Cisco was an accomplished auto mechanic, a skilled carpenter and electrician. He was a successful electrical contractor for many years and owned and operated Alleman Electric. He taught his grandson, Chad Jr. his craft and shared his many life experiences with him. He taught him the value of having a trade and a skill set that would serve him well going forward. He loved life, music and a good party. He lived in the French Quarter for 20 plus years and his nickname “Cisco” manifested itself during that time period and he embraced it. He was truly “The Cisco Kid” reincarnated. He ran high and hard in the saddle. We will always remember Cisco “turning wrenches” as he restored and customized his 1956 Chevy, riding his BSA motorcyle with the chopper style steering bars and his love of James Brown’s music and how he could mimic his dance moves. Every time we hear the recorded song, “The Cisco Kid Was A Friend Of Mine” by War playing we will think of Cisco. That song became his anthem. Cisco loved his family and friends and had a special love for his grandchildren, Chad Jr. and Demi Grace. His grandson said it best, “Paw Paw was a cat with a million lives”. We love you Cisco. You will be missed, “Rest in peace dear brother”. Relatives and friends are invited to attend the Memorial Service at L. A. Muhleisen & Son Funeral Home, 2607 Williams Blvd., Kenner on Monday, November 27, 2017 at 11:00 a.m. Visitation from 9:00 a.m. to 11:00 a.m.

The family of Cecil Carmel Alleman created this Life Tributes page to make it easy to share your memories.