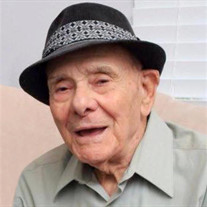 Carlos Emiliano Torres passed away on Monday, January 18, 2016. A native of Nueva Paz, Habana, Cuba and 45 year resident of Kenner, age 94 years. Beloved husband of 38 years of Ena Christiana Torres. Loving father of Gricel Rodriguez (Jorge), Noah Torres and Carlos Torres (Vivian). Devoted grandfather of Zulay, Melissa, Kimberly, Leah and Julian and devoted great grandfather of Alani, Raquel, Kimberly, Andrew, Lestin and Natalie. Loving uncle to numerous nieces and nephews. Loving brother of Luis Ernesto Torres and Esther Elizalde. He is preceded in death by his brothers and sisters, Eugenio Torres, Esmerita Torres, Enrique Torres, Eladio Torres(Edilia), Ena Francisca Gonzalez and Eduardo Torres. Carlos came to the United States in 1970 and settled in Kenner where he has lived ever since. In 1989, he started the family’s business, Grinoca Furniture Store. A devout Christian, he faithfully served for 40 years as a Deacon at Emmanuel Iglesia Bautista on Williams Blvd. Loved by all who knew him, he was a gentle and caring man who was known for his calm way and generosity to those around him. He will be greatly missed but always loved and remembered. Relatives and friends are invited to attend the Funeral Service at L.A. Muhleisen & Son Funeral Home, 2607 Williams Blvd., Kenner on Saturday, January 23, 2016 at 11:00 am with Visitation beginning at 9:00 AM. Evening Visitation on Friday, January 22, 2016 from 6:00 PM to 9:00 PM. Interment following funeral in Lawn Park Mausoleum.

The family of Carlos Emiliano Torres created this Life Tributes page to make it easy to share your memories.