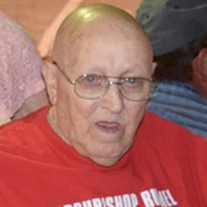 Arthur H. “Butch” Jones, Jr. went to his heavenly home on Sunday September 17, 2017 at the age of 78. He was born August 4, 1939 in New Orleans, lived in the Irish Channel and attended St. Mary , St Alphonsus and Redemtorist Churchs and Schools. He enlisted in the Air Force at the age of 17 and was a member and pitcher of the Air Force Baseball Team. He and his wife Shirley were married for 53 years, lived in Metairie and were parishioners of Our Lady of Divine Providence Catholic Church. He was employed through the Pipefitters Local Union #60 for over 40 years. For many years he enjoyed coaching various sports teams and the boxing club and Delta Playground. His favorite pastime was watching sports, particularly rooting for the New Orleans Saints and the LSU Tigers. Arthur “Butch” is survived by his devoted wife Shirley, his son and daughter-in-law Arthur “Butch” Jones III and Dianne Jones, his daughter and son-in-law Michelle and Steven Roques and his much beloved grandchildren Amanda Jones, Arthur “Butch” Jones IV, Spencer Roques and Seth Roques. He is also survived by his sisters Dionne Presentbach (Richard), Joan & Jack Donnow, Elvina Tiffany (Larry), his brother-in-law Carroll Steno (Jean), his siblings-in-law Margie & Joe Kennedy, Katherine DeSoto (Signa), Dewey & Vilmis Dufour, Vicki Dufour (Samuel), Alvin & Mary Dufour, Lucille Zerangue (Abel), Leland Lagrange (Loretta), Janet & Laniel Guillot, Debbie Dufour (Joe “Jr”) and many nieces and nephews. He is preceded in death by his parents Arthur and Elvina Becker Jones. A Mass of Christian Burial will be held at Our Lady of Divine Providence Church, 8900 West Metairie Avenue, Metairie, LA at 1:30 pm on Friday September 22, 2017. Visitation will be in the Church from 11:30 am until the time of the service. Burial will follow the Mass at Lafayette Cemetery No. 1 in New Orleans. Lectors and gift bearers will be his grandchildren. In lieu of flowers donations to your Church are preferred. Arrangements by L. A. Muhleisen & Son Funeral Home.

The family of Arthur H. "Butch" Jones, Jr. created this Life Tributes page to make it easy to share your memories.