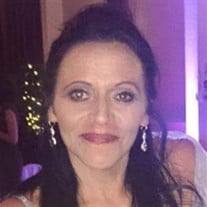 Anna Riepele Driscoll passed away peacefully, surrounded by her family on Saturday, October 12, 2019. This is the story of Anna (Gammy) Driscoll. Anna was immensely loved, and will be forever missed. “Gammy”, as she liked to be called by her grandchildren, “Babe”, as Leo, her loving husband of 30 years called her, was an amazing wife, mom, daughter, sister, aunt and a homemaker like no other could be. Anna’s story began on June 3, 1962 in New Orleans, LA. She was the youngest child to Alberto and Lillia Riepele; and the youngest sibling to Julio, Mary, Lillya and Nora. Soon after Anna was born, Alberto and Lilly moved the family to Metairie where Anna and her siblings spent their childhood, growing up and making many lifelong friends and memories. Metairie, LA is where she would meet the love of her life, Leo J. Driscoll, III. They had a beautiful romance and were married on February 10, 1989, soon to be Valentines Day. They spent the next 35 years creating wonderful memories with their three children, Leo, Nicole and Mark - and of course soon after, they welcomed five grandchildren; Christian, Jade, Elise, Izabell and Jax. Anna’s grandchildren were her heart and joy. There’s no denying that her grand babies as she called them, were her favorite. Time spent at Gammy’s house was very special for her grand babies. She also had another favorite, which were frequent visits to the French Press Coffee House. Couldn’t start her morning without her favorite coffee. But her ultimate favorite was to create beautiful holiday dinners with the entire family and close friends, and backyard pool BBQ parties. Loved ones that will miss Anna until they meet again are her husband, Leo Jerome Driscoll, III; her mother, Lillia Flores; her two sons, Leo J. Driscoll, IV and Mark Brinton; her daughter, Nicole Brinton; her daughter-in-law, Chantel Driscoll; her grandchildren, Christian Cabal and Jade, Elise and Izabell Driscoll, as well as, Jax Fortier; her siblings, Julio Riepele, Mary Larson, Lillya Greathouse and Nora Riepele; and several nieces, nephews and cousins who will also miss her enormously! And the story goes until we see you again our beautiful Anna. We love and miss you tremendously. Relatives and friends are invited to attend the visitation at L. A. Muhleisen & Son Funeral Home, 2607 Williams Blvd., Kenner, LA on Friday, October 18, 2019 from 1:00 p.m. to 3:00 p.m. followed by a Funeral Service at 3:00 p.m. To share memories or condolences, please visit www.muhleisen.com.

Anna Riepele Driscoll passed away peacefully, surrounded by her family on Saturday, October 12, 2019. This is the story of Anna (Gammy) Driscoll. Anna was immensely loved, and will be forever missed. &#8220;Gammy&#8221;, as she liked to be... View Obituary & Service Information

The family of Anna Riepele Driscoll created this Life Tributes page to make it easy to share your memories.

Anna Riepele Driscoll passed away peacefully, surrounded by her...