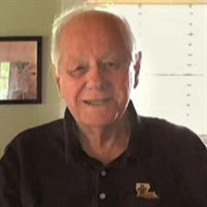 On Monday January 4, 2021 at the age of 97, Angelo Joseph Spinato, native of New Orleans and resident of Kenner, Louisiana of 65 years, entered into his eternal rest prepared by his Lord and Savior. He was preceded in death by the love of his life, Catherine Delores Hemmelder Spinato. He was the third son born to the late Rose Albano Spinato and Angelo Frank Spinato, and brother of Christine Spinato Sauter (Henry), the late Peter Spinato (Cindy), Jerome Spinato (Gladys, Marie), Frank Spinato (Rosalie), and Josephine Spinato Leblanc (Robert). Angelo returned a decorated combat veteran from WWII. He was the loving father to Angelo Frank Spinato (Maria), Michael Joseph Spinato (Diane), Joseph Christopher Spinato (Mary), and Kathleen Rose Spinato Elstrott (Randolph). Angelo and Catherine were the grandparents to Michael Christopher Spinato, Katherine Blair Spinato, Julie Lynne Spinato Hunter (Andrew), Risa Kathleen Elstrott Williams (Chris), Kaylyn Anne Spinato Bourgeois (Michael), Nicholas John Elstrott, and Juan Carlos Martinez. Angelo was affectionately known as Little Poppa to his great grandchildren, Sophia Lynne Hunter, Jude Joseph Hunter, Margaret Kate Bourgeois, and Caroline Lucy Bourgeois. He was also the beloved uncle to numerous nieces, nephews, grandnieces, and grandnephews. He was a proud Italian American, and he was loved tremendously by his family and by his wife Catherine’s German family. His remarkable life began at an early age as he was taught to box by his beloved big brother Pete. Angelo practiced these skills on a daily basis, which led to a boxing scholarship to Southwestern Louisiana University in Lafayette. Soon after, he was drawn to the front line of the largest battle of WWII, The Battle of The Bulge, and eventually into Germany during the Allied army’s occupation. After the war, he earned his degree in business administration/accounting from Tulane University on the G.I. Bill and began a career in international shipping. After impressing his superiors with his sharp mind for business and keen intellect, he soon became a titan of industry as Vice President of an international shipping business. A successful businessman, Angelo traveled and met countless foreign dignitaries and shipping moguls, who he also hosted and entertained in his beloved hometown of New Orleans during its golden age. After retiring at the age of 72, he was to take on a new mantle, lending his expertise as a consultant to his former employer, Waterman Central Gulf, and later to his three sons' business enterprises. A lover of history and master storyteller, Angelo worked with a local author on a WWII novel and participated in various interviews about the subject. His name is etched in the bricks of the World War II museum. He was also able to devote more time to his family. He kicked off his retirement by traveling across the nation with his wife Catherine, his sister Christine, and brother in law Joe. Later, he enjoyed meeting with all of his children and grandchildren on a weekly basis for lunch, attending family parties, as well as taking countless vacations with them. He enjoyed numerous Saints games with his family and has his name on the wall of 50 year Saints season tickets holders in Champion Square. It was during all these times he truly passed down his legacy. We learned all of his stories and life lessons and learned to follow his example as a kind and loving father and family man. Relatives and friends are invited to attend the visitation at L. A. Muhleisen & Son Funeral Home, 2607 Williams Blvd., Kenner on Thursday, January 14, 2021 from 10:00 a.m. to 12:30 p.m. followed by a Funeral Mass at Our Lady of Perpetual Help, 500 Minor Street, Kenner at 1:00 p.m. Interment in Garden of Memories Cemetery, Metairie. To share memories or condolences, please visit www.muhleisen.com

On Monday January 4, 2021 at the age of 97, Angelo Joseph Spinato, native of New Orleans and resident of Kenner, Louisiana of 65 years, entered into his eternal rest prepared by his Lord and Savior. He was preceded in death by the love of his... View Obituary & Service Information

The family of Angelo Joseph " Junior" Spinato created this Life Tributes page to make it easy to share your memories.