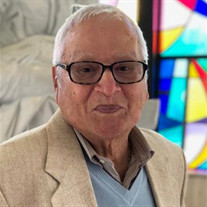 Angel Augusto Ramos passed away surrounded by his loved ones on Sunday November 17th, 2019 at the age of 78. He was a native of San Pedro Sula Honduras and a resident of Kenner, Louisiana. Nicknamed ‘Picho’ as child, he grew up on a banana plantation along the Caribbean Coast in Honduras, where his elementary education was in American schools. He spent his high school years in San Pedro Sula Honduras, which became home to the family. Ever an adventurous spirit, he embarked on what would become his new life in the United States in 1961. While residing in the Bronx, New York, he met the woman who would become his wife of 53 years. They met while working in a factory in Yonkers, NY, where he was a line worker, she the supervisor. Jokingly, he would often say, “she’s been the boss since the day we met.” Having made frequent trips from New York to New Orleans to visit friends and family throughout the late 1960s, then moved to New Orleans in the early 1970s married well with his love of food, music and an all-around good time. An embodiment of the pursuit of the American dream, his hard work and sacrifice, starting from odd jobs early on in New York to completing his studies in New Orleans, he became an established, well-known electrician and sole proprietor. For years, he was the “go to guy” for electrical services, and generously provided many years of those services pro bono to the church and its related events, including the inimitable Festival Mensaje in New Orleans. A true professional, he curated and collected his tools and supplies as a museum would its art. His work-hard play-hard attitude on life always in tow, he adopted his new homeland as much as it welcomed him. He was an impassioned fan of John Wayne movies, and a life-long fan of the Ford family of vehicles, his first being a 1966 Ford Mustang, followed by a series, over the decades, of the iconic Ford F- 150 truck. He was a man of sharp wit and intellect. A man of diverse hobbies, he enjoyed communicating across continents as a HAMM radio operator, he became a master of the grill and epic crawfish or crab boils, he enjoyed the meditative effects of washing and waxing the cherished trucks to his exacting standards, he precision-science manicured the lawn, and in his retirement, he employed his prodigious green thumb to manifest a tropical mini-plantation in the backyard, the family and neighborhood being the happy beneficiaries of the plentiful harvest. While there was never a dull moment in his life, nor was there ever a silent one- his passion for music, especially Mariachi ballads and Caribbean rhythms – transcending all aspects of life for him. Papi, we are profoundly grateful for the father you were to us, the husband you were to Mami, and the person you were for all. Widower of Esperanza Muniz Ramos who preceded him in death. Loving father of Selma Rita Ramos English (Reginald James English) and Pilar Suyapa Ramos Krippendorff (Kaihan Pascal Krippendorff). Cherished grandfather of Andres Ernesto Acosta, Sofia Helena English, Lucas Somar Krippendorff, Kaira Maya Krippendorff and Makar Santos Krippendorff. Devoted son of the late Angela Soledad Araya de Ramos and David Ramos Calderon. Beloved brother of Ana Rosa Ramos de Mendieta, David Ramos, Virma Esperanza Ramos, Norma Ramos de Saybe, Blanca Ramos Thibodeaux (Castro) and Antonieta (Toni) Ramos Wetzel (Mike). Also survived by dozens of nieces and nephews, and several Godchildren. We express sincere thanks to the staff of Ochsner Medical Center and Hospital, the staff of Cobalt Rehabilitation Center and unending gratitude to his caregiver of six years, Lillian Montoya and her sons. Relatives and friends, members of St. Jerome Parish in Kenner, the staff at Chateau de Notre Dame, Doctors, nurses and staff of Ochsner Medical Center and Hospital and Cobalt Rehabilitation Center are invited to attend the visitation at L. A. Muhleisen and Son Funeral Home, 2607 Williams Blvd. Kenner, LA 70062 on Thursday, November 21st 2019 from 6:00 pm to 9:00 pm and on Friday, November 22nd, 2019 at St. Jerome Catholic Church, 2402 33rd St., Kenner from 9:00 am to 11:00 am followed by a Funeral Mass at 11:00 am. Interment in St. Patrick Cemetery No. 3, New Orleans. In lieu of flowers, donations can be made in his memory to St. Jerome Catholic Church in Kenner, Louisiana. Please share memories or condolences at www.muhleisen.com

Angel Augusto Ramos passed away surrounded by his loved ones on Sunday November 17th, 2019 at the age of 78. He was a native of San Pedro Sula Honduras and a resident of Kenner, Louisiana. Nicknamed &#8216;Picho&#8217; as child, he grew up... View Obituary & Service Information

The family of Angel Augusto Ramos created this Life Tributes page to make it easy to share your memories.

Angel Augusto Ramos passed away surrounded by his loved ones...