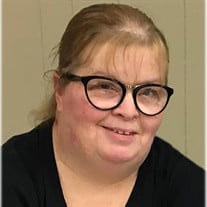 Amy Rawdon, a former Military Training Personnel and longtime resident of Metairie, LA, passed away unexpectedly on January 14, 2022 at age 52. Amy is survived by her two parents; her children, Don, Megan, and Nicholas. She is also survived by her two sisters, Melanie and Katharine, as well as her granddaughter, Leah. Amy was born on July 1, 1969 in New Orleans, Louisiana and was adopted by John and Eula Rawdon just 8 months later. She graduated from Blue Cliff College, receiving her diploma in Massage Therapy on October 21st 2010. She would go on to receive an Associates in the same subject, shortly after. She spent a lot of her life working in many different fields, including: customer service, security, and military training. When she was not working she devoted much of her time to her three children, whom she loved dearly. Amy was a devoted mother and a music enthusiast. She took piano lessons at a very young age and quickly developed into a prodigy. Her childhood piano still rests at her parents home to this day. According to her loved ones, she was exceptionally well at giving advice. Her faith in God was strong and she always felt like she could do better as a Christian. She would enjoy theological discussions with her son, Nicholas. She will be missed by all who had the chance to know her. Relatives and friends are invited to attend the Visitation and Memorial Service at L. A. Muhleisen & Son Funeral Home, 2607 Williams Blvd., Kenner on Tuesday, January 18, 2022. Visitation from 1:00 p.m. to 3:00 p.m. Followed by a Memorial Service at 3:00 pm. Eric Dishongh will be the officiant. Any flowers or condolences may be sent to 6504 Hastings Street Metairie, LA 70003.

Amy Rawdon, a former Military Training Personnel and longtime resident of Metairie, LA, passed away unexpectedly on January 14, 2022 at age 52. Amy is survived by her two parents; her children, Don, Megan, and Nicholas. She is also survived... View Obituary & Service Information

The family of Amy Louise Rawdon created this Life Tributes page to make it easy to share your memories.