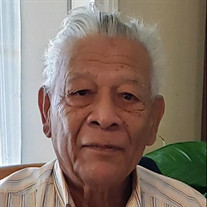 Alfonso de Jesús Mejía passed away on Monday, August 16, 2021, at the age of 86. Alfonso was born in Goascoran, Honduras on February 18, 1935. He was a resident of Kenner, LA for 40 years. He is survived by his beloved wife of 62 years, Tracy Mejía and their 6 children along with their spouses: Lillian Orellana, Alba Medina (Fred), Martha Mercado (Marvin), Lesby Chenevert (Brady), Ada Lema Montalbano (Michael) and David Mejía (Kristine). Grandfather of 16: Dania Orellana, Diana Orellana, Jamie Gil (Michael), Jose Orellana Jr., Lauren Medina, Benjamin Medina, Julia Medina, Marvin A. Mercado (Delicia), Sara Bertram (Andrew), Natalie Mercado, Brady Chenevert, Jr., Jonathan Chenevert, Emily Lema, Joel Lema Jr., David N. Mejía, and Cristina Mejía. The Great Grandfather of 10: Jennifer L. Orellana, Sebastian Gil, Sophia Gil, Mateo Orellana, Gabriel Orellana, Jade Orellana, Nazareth Orellana, Josiah Mercado, Melanie Mercado, and Isaiah Bertram. He is survived by his brother Ramon “Moncho” Coello and numerous nieces and nephews. He was preceded in death by his mother Nicolasa Chavez, his father Marcelo Coello, and his brother Marcelo Mejía. Alfonso lived a simple and practical life. At the time of life’s inevitable disappointments he would tell us, you grieve one day and then move on. Because life isn’t what you hope for or dream. Life is what it is. His philosophy was to work hard at what you can change and accept what you cannot. His practical side however did not mean he did not have faith nor compassion. On the contrary, it was in his practicality that he acknowledged God’s supremacy and practiced compassion. He was a loving and faithful husband to his wife, Tracy. He liked to tell her “what you ask of me are like orders to me”. He was devoted to her and his children. He worked selflessly to provide his children a better life than his own. It was in that spirit that he immigrated to the United States in 1968. His prayer at that time was that God grant him life to see his work as a father to an end. God granted his request and even more. He was able to enjoy and be of service to his many grandchildren and great grandchildren. Because Alfonso recognized God’s love and grace in his life, he extended that love to others that surrounded him. He gave generously and loved abundantly. He was always willing to lend a hand or do a favor for family and friends. Alfonso was not formally educated but he was a wise man. He shared his wisdoms in humorous ways that will remain with all who knew him. If he ever gave advice that was ignored, he would say, it’s ok if you don’t learn from my words because life will teach you. And so it does. In Alfonso’s sunset years, his prayer was that God would grant him a quick passing. He remained a vibrant and an active person right until the very end. His passing was sudden and quick just as he prayed for. Alfonso and his family moved to Kenner in 1972. He became a member of the Spanish Mission of Williams Blvd. Baptist Church, which later became Iglesia Bautista Emmanuel. In recent years, he became a member of Iglesia Bautista Bethel in Kenner. He lived a faith-filled life that was an example to all who knew him. Although we will miss him, we are comforted to know that he is now walking the streets of gold with our heavenly Father. Relatives and friends are invited to attend the visitation and funeral service at L.A. Muhliesen & Son, 2607 Williams Blvd. Kenner, LA on Saturday, August 28, 2021. Visitation begins at 9.00 a.m., service at 11:00 a.m., followed by interment in Jefferson Memorial Gardens.

Alfonso de Jesús Mejía passed away on Monday, August 16, 2021, at the age of 86. Alfonso was born in Goascoran, Honduras on February 18, 1935. He was a resident of Kenner, LA for 40 years. He is survived by his beloved wife of 62 years, Tracy... View Obituary & Service Information

The family of Alfonso de Jesus Mejia created this Life Tributes page to make it easy to share your memories.