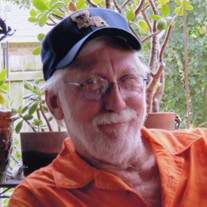 Alan Sirrine passed away unexpectedly on Thursday, March 24. He was 63 years old. Beloved husband of 28 years of Valerie Hart Sirrine. Loving brother of Dannelle Sirrine and Jon Sirrine and brother-in-law of Cheryl Helm (Bob) and Alicia Obermeyer (Ed). Devoted uncle of Molly Leskovic, Rachel Helm, Rebecca Helm, Robert Helm and Sean Sirrine. Loving son-in-law of Lois Hart. Alan is also survived by his cherished dogs Yogi and Dixie. He is preceded in death by his parents, Ivan and Arlene Sirrine and his sister, Sue Sirrine Leskovic. Born in Syracuse, NY, Alan grew up in Cheswick, PA. In his youth, he enjoyed hunting, fishing, and playing sports. He was an Eagle Scout and U. S. Army Veteran. He was an avid Steelers fan as well as a Saints fan. Alan has called Metairie home since 1982 and loved everything that was Louisiana. He was a master carpenter most recently employed at Ochsner Medical Center in Jefferson. Prior to Hurricane Katrina, he was a member of the Arabi Social Society and missed his friends displaced by the storm. He enjoyed building and remodeling, gardening, creating stained glass, boiling seafood, music, the beach and the mountains. His love of life, creativity, laughter and crawfish will be missed by many Relatives and friends are invited to attend the Memorial Service at L. A. Muhleisen & Son Funeral Home, 2607 Williams Blvd., Kenner on Friday, April 1, 2016 at 7:00 PM with Visitation beginning at 5:00 PM. The family respectfully requests that donations be made in Alan’s name to the Jefferson Humane Society, 4421 Jefferson Hwy., New Orleans, LA 70121 or the Ozanam Inn, 843 Camp St. New Orleans, LA 70130 or the charity of your choice.

The family of Alan Sirrine created this Life Tributes page to make it easy to share your memories.